Ben Seidman guest stars on the Netflix Original Brainchild produced by Pharrell. He appeared on Penn & Teller: Fool Us on the CW network and starred in two specials on Travel Channel.  He was the highest rated performer for Princess Cruises and won the title Entertainer of the Year.

Seidman is the only person in history to be named the Resident Magician at Mandalay Bay, Resort & Casino in Las Vegas. After several thousand performances at numerous luxury casinos, Seidman became known as a powerful staple of the Vegas entertainment scene. His residency at Mandalay followed three-seasons consultanting for Mindfreak on A&E, during which he worked full-time, designing illusions for Criss Angel.

Now based in Los Angeles, Ben continues to travel bringing his one-man show across the world.  He headlined the Atlantis Resort & Casino (Bahamas), The Royalton Riviera (Cancun) and performed a record-breaking one hundred and twenty shows at The Venetian (Macau China).  Clients have flown him as far as Doha, Qatar for private and corporate events. Ben was voted Best Small Venue Artist by Campus Activities Magazine and spent three months in Stockholm, Sweden writing and directing magic for SVT, the biggest TV channel in Sweden.

Ben is a favorite at the world famous Comedy & Magic Club in Hermosa Beach, CA, a headliner at Catch a Rising Star, and a frequent performer at the Magic Castle in Hollywood. He has been featured in two Just For Laughs tours spanning 23 cities across Canada and appears in a feature film documenting the tour.

Seidman’s performances are jam packed with stand-up comedy, fascinating true stories, and world- renowned sleight-of-hand. His energy and playfulness are contagious as they spread through the audience and he never fails to give a sensational performance. 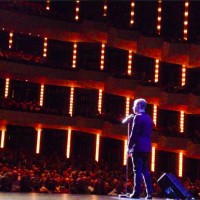 COMPANIES AND ORGANIZATIONS WHO HIRE BEN YEAR AFTER YEAR